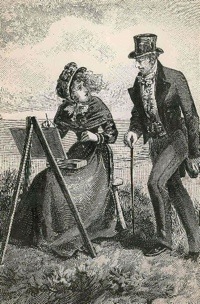 January 10th, 1827. While writing the above, yesterday evening, I sat in the drawing-room. Mr. Huntingdon was present, but, as I thought, asleep on the sofa behind me. He had risen, however, unknown to me, and, actuated by some base spirit of curiosity, been looking over my shoulder for I know not how long; for when I had laid aside my pen, and was about to close the book, he suddenly placed his hand upon it, and saying – ‘With your leave, my dear, I’ll have a look at this,’ forcibly wrested it from me, and, drawing a chair to the table, composedly sat down to examine it – turning back leaf after leaf to find an explanation of what he had read. Unluckily for me, he was more sober that night than he usually is at such an hour.

Of course I did not leave him to pursue this occupation in quiet: I made several attempts to snatch the book from his hands, but he held it too firmly for that; I upbraided him in bitterness and scorn for his mean and dishonourable conduct, but that had no effect upon him; and, finally, I extinguished both the candles, but he only wheeled round to the fire, and raising a blaze sufficient for his purposes, calmly continued the investigation. I had serious thoughts of getting a pitcher of water and extinguishing that light too; but it was evident his curiosity was too keenly excited to be quenched by that, and the more I manifested my anxiety to baffle his scrutiny, the greater would be his determination to persist in it – besides it was too late.

‘It seems very interesting, love,’ said he, lifting his head and turning to where I stood wringing my hands in silent rage and anguish; ‘but it’s rather long; I’ll look at it some other time; – and meanwhile, I’ll trouble you for your keys, my dear.’

‘The keys of your cabinet, desk, drawers, and whatever else you possess,’ said he, rising and holding out his hand.

‘I’ve not got them,’ I replied. The key of my desk in fact was, at that moment, in the lock, and the others were attached to it.

‘Then you must send for them,’ said he; ‘and if that old bitch, Rachel, doesn’t immediately deliver them up, she tramps bag and baggage tomorrow.’

‘She doesn’t know where they are,’ I answered, quietly placing my hand upon them, and taking them from the desk, as I thought, unobserved. ‘I know, but I shall not give them up without a reason.’

‘And I know, too,’ said he, suddenly seizing my closed hand and rudely abstracting them from it. He then took up one of the candles and relighted it by thrusting it into the fire.

‘Now, then,’ sneered he, ‘we must have a confiscation of property. But, first, let us take a peep into the studio.’

And putting the keys into his pocket, he walked into the library. I followed, whether with the dim idea of preventing mischief or only to know the worst, I can hardly tell. My painting materials were laid together on the corner table, ready for to-morrow’s use, and only covered with a cloth. He soon spied them out, and putting down the candle, deliberately proceeded to cast them into the fire – palette, paints, bladders, pencils, brushes, varnish: – I saw them all consumed – the palette-knives snapped in two – the oil and turpentine sent hissing and roaring up the chimney. He then rang the bell.

‘Benson, take those things away,’ said he, pointing to the easel, canvas, and stretcher; ‘and tell the housemaid she may kindle the fire with them: your mistress won’t want them any more.’

Benson paused aghast and looked at me.

‘Take them away, Benson,’ said I; and his master muttered an oath.

‘And this and all, sir?’ said the astonished servant, referring to the half-finished picture.

‘That and all,’ replied the master; and the things were cleared away.

Mr. Huntingdon then went up-stairs. I did not attempt to follow him; but remained seated in the arm-chair, speechless, tearless, and almost motionless, till he returned about half an hour after, and walking up to me, held the candle in my face and peered into my eyes with looks and laughter too insulting to be borne. With a sudden stroke of my hand I dashed the candle to the floor.

‘Hal-lo!’ muttered he, starting back – ‘She’s the very devil for spite. Did ever any mortal see such eyes? – they shine in the dark like a cat’s. Oh, you’re a sweet one!’ So saying, he gathered up the candle and the candle-stick. The former being broken as well as extinguished, he rang for another.

‘Benson, your mistress has broken the candle: bring another.’

‘You expose yourself finely,’ observed I, as the man departed.

‘I didn’t say I’d broken it, did I?’ returned he. He then threw my keys into my lap, saying, – ‘There! you’ll find nothing gone but your money, and the jewels – and a few little trifles I thought it advisable to take into my own possession, lest your mercantile spirit should be tempted to turn them into gold. I’ve left you a few sovereigns in your purse, which I expect to last you through the month – at all events, when you want more you will be so good as to give me an account of how that’s spent. I shall put you upon a small monthly allowance, in future, for your own private expenses; and you needn’t trouble yourself any more about my concerns; I shall look out for a steward, my dear; I won’t expose you to the temptation. And as for the household matters, Mrs. Greaves must be very particular in keeping her accounts: we must go upon an entirely new plan – ‘

‘What great discovery have you made now, Mr. Huntingdon? Have I attempted to defraud you?’

‘Not in money matters, exactly, it seems, but it’s best to keep out of the way of temptation.’

Here Benson entered with the candles, and there followed a brief interval of silence – I sitting still in my chair, and he standing with his back to the fire, silently triumphing in my despair.

‘And so,’ said he at length, ‘you thought to disgrace me, did you, by running away and turning artist, and supporting yourself by the labour of your hands, forsooth? And you thought to rob me of my son too, and bring him up to be a dirty Yankee tradesman, or a low, beggarly painter?’

‘Yes, to obviate his becoming such a gentleman as his father.’

‘It’s well you couldn’t keep your own secret – ha, ha! It’s well these women must be blabbing. If they haven’t a friend to talk to, they must whisper their secrets to the fishes, or write them on the sand or something; and it’s well too I wasn’t overfull tonight, now I think of it, or I might have snoozed away and never dreamt of looking what my sweet lady was about – or I might have lacked the sense or the power to carry my point like a man, as I have done.’

Leaving him to his self-congratulations, I rose to secure my manuscript, for I now remembered it had been left upon the drawing- room table, and I determined, if possible, to save myself the humiliation of seeing it in his hands again. I could not bear the idea of his amusing himself over my secret thoughts and recollections; though, to be sure, he would find little good of himself therein indited, except in the former part – and oh, I would sooner burn it all than he should read what I had written when I was such a fool as to love him!