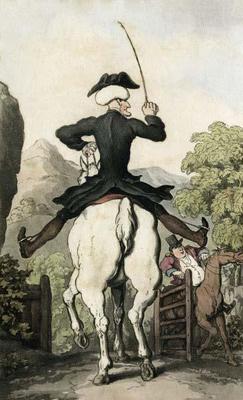 Syntax now set his heart at rest,
Thought what was done was for the best,
And to fill up the interval
He would on dear Miss PALLET call.
Here his reception was most kind: ”
Sweet manners with superior mind,
And taste and genius were combin’d.
__When the first formal chat was o’er,
The works of Artists they explore,
Whose labours gain’d the height of fame
And fix’d the imperishable name.
They then the living talents try,
With just remark and critic eye.
“And now,” she said, “you will incline
To tell me what you think of mine.
I hear you say, ‘ how sweet, how fine! ‘
But if, while your kind words commend,
You should see faults__ O what a friend! ”
“__I see no faults__ but let me tell,
The leading power of painting well
Must spring from studying various nature
In ev’ry form and ev’ry feature:

‘Tis that alone which can impart
The height and depth and breadth of art;
Nor do I see your pencil err
From that primeval character.”
“Doctor,” she said, “O will you stay
And take your dinner here to day:
You then will hear two Artists prate
Of Art and who each other hate.
Such things there are e’en lib’ral arts
Are known to poison human hearts,
And their warm feelings oft supply
With envy base and jealousy.”
__The Artists came ” Sir, Mr. B__
‘Tis Doctor Syntax : Mr. G__ ”
The dinner soon appear’d in view,
And pass’d as other dinners do:
But with the fruit the talk began,
And thus around the table ran.
__Said Syntax, ” I my wonder own
Where a fair lady’s art is shown,
That among all the figures here,
The God of Love does not appear.”
“__We known professors of the art,”
Says G__ ” have got him quite by heart:
We want no model, do you see,
Of this familiar Deity:
Sure am I, that I’m not so stupid,
But sleeping I could paint a Cupid.”__
“__I wish you would the trouble take
To paint a Cupid when awake,”
Said titt’ring B__ ” I know ’twill prove
A very sleepy God of Love.”
” Have done ! have done ! ” Miss Pallet said,
” The passion shall be well display’d,
Not as a Painter’s eye may view it,
But as the Doctor’s tongue can do it:-

And therefore, Sirs, I humbly move
That he may speak his thoughts on Love.”
“__’Tis a nice theme,” Syntax replied,
” But ladies must not be denied:
Mine are peculiar thoughts I fear,
And I ask candour’s self to hear.
__The passion that commands the heart
Is in this world a thing apart;
And throughout life, as we may learn,
Has nothing like a fix’d concern:
It makes fools wise, and wise men fools,
But not by any written rules.
Love, as recording Hist’ry shows,
Leads wisdom often by the nose:
Nature does female weakness arm
With that inexplicable charm
That oft without exterior grace,
Or piercing eye or lovely face,
Or e’en th’ alluring power of wit,
Makes all-presuming man submit;
Assumes the full domestic reign,
And sees him smile to wear the chain.
It is a secret sympathy, 1
A hidden power that doth decree,
As in the world we often see,
Natures the most oppos’d to join
At the matrimonial shrine;
Nay, has been often known to match
Affection warm with hands that scratch;
And e’en in Hymen’s net trepan,
The polish’d Peer and blowzy Nan.
Such the effect, but then the cause
Is work’d by Nature’s hidden laws,
And if you ask me to explain 1
The Whys and Wherefores, ’tis in vain,
I cannot, and think no man can.”

“__The Doctor knows the human heart,”
Says B__ ” but can he talk of Art? ”
“__That,” says the Lady, “will appear:
If you will listen, you shall hear.
__What think you of this sketch, my friend? ”
” In ev’ry part I do commend
Its force, its freedom,” Syntax said:
When either Artist shook his head.
The Doctor then, in prudence clos’d
The observations he propos’d:
But thus continued:- ” May I ask,
Should it be no unpleasant task,
To tell me, if the Arts abound ”
And flourish fair in British ground,
Where Science is so largely found?”
“__O no,” ’twas said, “they’re going down,
There’s scarce an Artist of renown.”
The Sage then mention’d many a name
That dwelt upon the lips of fame.
” O no,” they said ; then, one by one,
With many a shrug, they ran them down,
And only differ’d in degree,
As they let loose their calumny.
This colour’d not, that wanted vigour,
A third knew nothing of the figure:-
Thus having clos’d their critic law,
They Syntax ask’d if he could draw:
When he his ready pencil took
And in the blank page of a book,
Design’d a gallows, from which swung
Two figures that by cordage hung.
” Pray,” it was said, ” who may be those ?
They are two murderers I suppose.”
“Yes,” Syntax said, “of my formation,
They’re Murderers of REPUTATION”