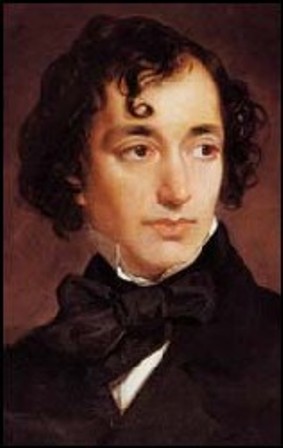 “The Rodensteins are a singular family. My mother was a Rodenstein. Do you think this beautiful?” said Mrs. Felix, showing Vivian a small miniature which was attached to a chain round her neck. It was the portrait of a youth habited in the costume of a German student. His rich brown hair was flowing over his shoulders, and his dark blue eyes beamed with such a look of mysterious inspiration, that they might have befitted a young prophet.

“’Tis Max, Max Rodenstein,” said the lady, with a faltering voice. “He was killed at Leipsic, at the head of a band of his friends and fellow-students. O, Mr. Grey! this is a fair work of art, but if you had but seen the prototype you would have gazed on this as on a dim and washed-out drawing. There was one portrait, indeed, which did him more justice; but then that portrait was not the production of mortal pencil.”

Vivian looked at his companion with a somewhat astonished air, but Mrs. Felix Lorraine’s countenance was as little indicative of jesting as that of the young student whose miniature rested on her bosom.

“Did you say not the production of a mortal hand, Mrs. Felix Lorraine?”

“I am afraid I shall weary you with my stories, but the one I am about to tell you is so well evidenced that I think even Mr. Vivian Grey will hear it without a sneer.”

“Max Rodenstein was the glory of his house. A being so beautiful in body and in soul you cannot imagine, and I will not attempt to describe. This miniature has given you some faint idea of his image, and yet this is only the copy of a copy. The only wish of the Baroness Rodenstein, which never could be accomplished, was the possession of a portrait of her youngest son, for no consideration could induce Max to allow his likeness to be taken. His old nurse had always told him that the moment his portrait was taken he would die. The condition upon which such a beautiful being was allowed to remain in the world was, she always said, that his beauty should not be imitated. About three months before the battle of Leipsic, when Max was absent at the University, which was nearly four hundred miles from Rodenstein Castle, there arrived one morning a large case directed to the Baroness. On opening it it was found to contain a picture, the portrait of her son. The colouring was so vivid, the general execution so miraculous, that for some moments they forgot to wonder at the incident in their admiration of the work of art. In one corner of the picture, in small characters yet fresh, was an inscription, which on examining they found consisted of these words: ‘Painted last night. Now, lady, thou hast thy wish.’ My aunt sank into the Baron’s arms.

“In silence and in trembling the wonderful portrait was suspended over the fireplace of my aunt’s favourite apartment. The next day they received letters from Max. He was quite well, but mentioned nothing of the mysterious painting.

“Three months afterwards, as a lady was sitting alone in the Baroness’s room, and gazing on the portrait of him she loved right dearly, she suddenly started from her seat, and would have shrieked, had not an indefinable sensation prevented her. The eyes of the portrait moved. The lady stood leaning on a chair, pale, and trembling like an aspen, but gazing steadfastly on the animated portrait. It was no illusion of a heated fancy; again the eyelids trembled, there was a melancholy smile, and then they closed. The clock of Rodenstein Castle struck three. Between astonishment and fear the lady was tearless. Three days afterwards came the news of the battle of Leipsic, and at the very moment that the eyes of the portrait closed Max Rodenstein had been pierced by a Polish Lancer.”

“That lady was myself.”