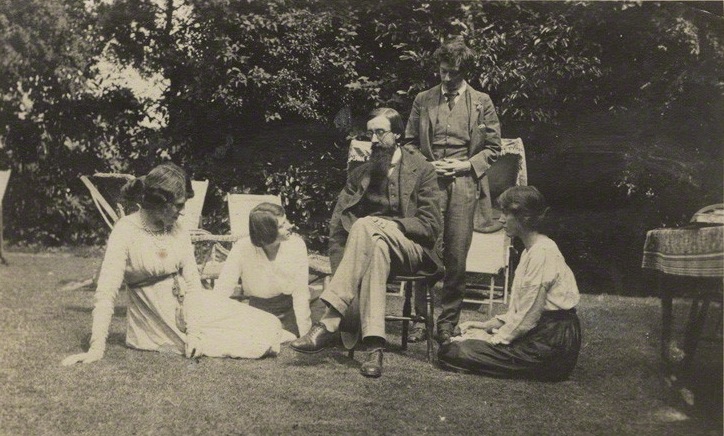 Gombauld had annexed for his painting-room a little disused
granary that stood by itself in a green close beyond the farm-
yard. It was a square brick building with a peaked roof and
little windows set high up in each of its walls. A ladder of
four rungs led up to the door; for the granary was perched above
the ground, and out of reach of the rats, on four massive
toadstools of grey stone. Within, there lingered a faint smell
of dust and cobwebs; and the narrow shaft of sunlight that came
slanting in at every hour of the day through one of the little
windows was always alive with silvery motes. Here Gombauld
worked, with a kind of concentrated ferocity, during six or seven
hours of each day. He was pursuing something new, something
terrific, if only he could catch it.

During the last eight years, nearly half of which had been spent
in the process of winning the war, he had worked his way
industriously through cubism. Now he had come out on the other
side. He had begun by painting a formalised nature; then, little
by little, he had risen from nature into the world of pure form,
till in the end he was painting nothing but his own thoughts,
externalised in the abstract geometrical forms of the mind’s
devising. He found the process arduous and exhilarating. And
then, quite suddenly, he grew dissatisfied; he felt himself
cramped and confined within intolerably narrow limitations. He
was humiliated to find how few and crude and uninteresting were
the forms he could invent; the inventions of nature were without
number, inconceivably subtle and elaborate. He had done with
cubism. He was out on the other side. But the cubist discipline
preserved him from falling into excesses of nature worship. He
took from nature its rich, subtle, elaborate forms, but his aim
was always to work them into a whole that should have the
thrilling simplicity and formality of an idea; to combine
prodigious realism with prodigious simplification. Memories of
Caravaggio’s portentous achievements haunted him. Forms of a
breathing, living reality emerged from darkness, built themselves
up into compositions as luminously simple and single as a
mathematical idea. He thought of the “Call of Matthew,” of
“Peter Crucified,” of the “Lute players,” of “Magdalen.” He had
the secret, that astonishing ruffian, he had the secret! And now
Gombauld was after it, in hot pursuit. Yes, it would be
something terrific, if only he could catch it.

For a long time an idea had been stirring and spreading,
yeastily, in his mind. He had made a portfolio full of studies,
he had drawn a cartoon; and now the idea was taking shape on
canvas. A man fallen from a horse. The huge animal, a gaunt
white cart-horse, filled the upper half of the picture with its
great body. Its head, lowered towards the ground, was in shadow;
the immense bony body was what arrested the eye, the body and the
legs, which came down on either side of the picture like the
pillars of an arch. On the ground, between the legs of the
towering beast, lay the foreshortened figure of a man, the head
in the extreme foreground, the arms flung wide to right and left.
A white, relentless light poured down from a point in the right
foreground. The beast, the fallen man, were sharply illuminated;
round them, beyond and behind them, was the night. They were
alone in the darkness, a universe in themselves. The horse’s
body filled the upper part of the picture; the legs, the great
hoofs, frozen to stillness in the midst of their trampling,
limited it on either side. And beneath lay the man, his
foreshortened face at the focal point in the centre, his arms
outstretched towards the sides of the picture. Under the arch of
the horse’s belly, between his legs, the eye looked through into
an intense darkness; below, the space was closed in by the figure
of the prostrate man. A central gulf of darkness surrounded by
luminous forms…

The picture was more than half finished. Gombauld had been at
work all the morning on the figure of the man, and now he was
taking a rest–the time to smoke a cigarette. Tilting back his
chair till it touched the wall, he looked thoughtfully at his
canvas. He was pleased, and at the same time he was desolated.
In itself, the thing was good; he knew it. But that something he
was after, that something that would be so terrific if only he
could catch it–had he caught it? Would he ever catch it?

Three little taps–rat, tat, tat! Surprised, Gombauld turned his
eyes towards the door. Nobody ever disturbed him while he was at
work; it was one of the unwritten laws. “Come in!” he called.
The door, which was ajar, swung open, revealing, from the waist
upwards, the form of Mary. She had only dared to mount half-way
up the ladder. If he didn’t want her, retreat would be easier
and more dignified than if she climbed to the top.

She skipped up the remaining two rungs and was over the threshold
in an instant. “A letter came for you by the second post,” she
said. “I thought it might be important, so I brought it out to
you.” Her eyes, her childish face were luminously candid as she
handed him the letter. There had never been a flimsier pretext.

Gombauld looked at the envelope and put it in his pocket
unopened. “Luckily,” he said, “it isn’t at all important.
Thanks very much all the same.”

There was a silence; Mary felt a little uncomfortable. “May I
have a look at what you’ve been painting?” she had the courage to
say at last.

Gombauld had only half smoked his cigarette; in any case he
wouldn’t begin work again till he had finished. He would give
her the five minutes that separated him from the bitter end.
“This is the best place to see it from,” he said.

Mary looked at the picture for some time without saying anything.
Indeed, she didn’t know what to say; she was taken aback, she was
at a loss. She had expected a cubist masterpiece, and here was a
picture of a man and a horse, not only recognisable as such, but
even aggressively in drawing. Trompe-l’oeil–there was no other
word to describe the delineation of that foreshortened figure
under the trampling feet of the horse. What was she to think,
what was she to say? Her orientations were gone. One could
admire representationalism in the Old Masters. Obviously. But
in a modern…? At eighteen she might have done so. But now,
after five years of schooling among the best judges, her
instinctive reaction to a contemporary piece of representation
was contempt–an outburst of laughing disparagement. What could
Gombauld be up to? She had felt so safe in admiring his work
before. But now–she didn’t know what to think. It was very
difficult, very difficult.

“There’s rather a lot of chiaroscuro, isn’t there?” she ventured
at last, and inwardly congratulated herself on having found a
critical formula so gentle and at the same time so penetrating.

Mary was pleased; he accepted her criticism; it was a serious
discussion. She put her head on one side and screwed up her
eyes. “I think it’s awfully fine,” she said. “But of course
it’s a little too…too…trompe-l’oeil for my taste.” She
looked at Gombauld, who made no response, but continued to smoke,
gazing meditatively all the time at his picture. Mary went on
gaspingly. “When I was in Paris this spring I saw a lot of
Tschuplitski. I admire his work so tremendously. Of course,
it’s frightfully abstract now–frightfully abstract and
frightfully intellectual. He just throws a few oblongs on to his
canvas–quite flat, you know, and painted in pure primary
colours. But his design is wonderful. He’s getting more and
more abstract every day. He’d given up the third dimension when
I was there and was just thinking of giving up the second. Soon,
he says, there’ll be just the blank canvas. That’s the logical
conclusion. Complete abstraction. Painting’s finished; he’s
finishing it. When he’s reached pure abstraction he’s going to
take up architecture. He says it’s more intellectual than
painting. Do you agree?” she asked, with a final gasp.

Gombauld dropped his cigarette end and trod on it.
“Tschuplitski’s finished painting,” he said. “I’ve finished my
cigarette. But I’m going on painting.” And, advancing towards
her, he put his arm round her shoulders and turned her round,
away from the picture.

Mary looked up at him; her hair swung back, a soundless bell of
gold. Her eyes were serene; she smiled. So the moment had come.
His arm was round her. He moved slowly, almost imperceptibly,
and she moved with him. It was a peripatetic embracement. “Do
you agree with him?” she repeated. The moment might have come,
but she would not cease to be intellectual, serious.

“I don’t know. I shall have to think about it.” Gombauld
loosened his embrace, his hand dropped from her shoulder. “Be
careful going down the ladder,” he added solicitously.

Mary looked round, startled. They were in front of the open
door. She remained standing there for a moment in bewilderment.
The hand that had rested on her shoulder made itself felt lower
down her back; it administered three or four kindly little
smacks. Replying automatically to its stimulus, she moved
forward.

“Be careful going down the ladder,” said Gombauld once more.

She was careful. The door closed behind her and she was alone in
the little green close. She walked slowly back through the
farmyard; she was pensive.