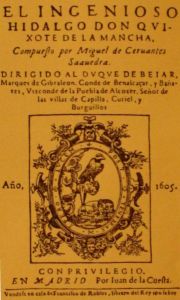 Part I. Chapter XXV PENANCE IN THE SIERRA MORENA

I say, too, that when a painter desires to become famous in his art he endeavours to copy the originals of the rarest painters that he knows; and the same rule holds good for all the most important crafts and callings that serve to adorn a state; thus must he who would be esteemed prudent and patient imitate Ulysses, in whose person and labours Homer presents to us a lively picture of prudence and patience; as Virgil, too, shows us in the person of AEneas the virtue of a pious son and the sagacity of a brave and skilful captain; not representing or describing them as they were, but as they ought to be, so as to leave the example of their virtues to posterity.

TERESA PANZA’S LETTER TO HER HUSBAND SANCHO PANZA. Here is the news of the village; La Berrueca has married her daughter to a good-for-nothing painter, who came here to paint anything that might turn up. The council gave him an order to paint his Majesty’s arms over the door of the town-hall; he asked two ducats, which they paid him in advance; he worked for eight days, and at the end of them had nothing painted, and then said he had no turn for painting such trifling things; he returned the money, and for all that has married on the pretence of being a good workman; to be sure he has now laid aside his paint-brush and taken a spade in hand, and goes to the field like a gentleman.

Part Two. Chapter III. OF THE LAUGHABLE CONVERSATION THAT PASSED BETWEEN DON QUIXOTE, SANCHO PANZA, AND THE BACHELOR SAMSON CARRASCO

“Miracles or no miracles,” said Sancho, “let everyone mind how he speaks or writes about people, and not set down at random the first thing that comes into his head.”

“One of the faults they find with this history,” said the bachelor, “is that its author inserted in it a novel called ‘The Ill-advised Curiosity;’ not that it is bad or ill-told, but that it is out of place and has nothing to do with the history of his worship Senor Don Quixote.”

“I will bet the son of a dog has mixed the cabbages and the baskets,” said Sancho.

“Then, I say,” said Don Quixote, “the author of my history was no sage, but some ignorant chatterer, who, in a haphazard and heedless way, set about writing it, let it turn out as it might, just as Orbaneja, the painter of Ubeda, used to do, who, when they asked him what he was painting, answered, ‘What it may turn out.’ Sometimes he would paint a cock in such a fashion, and so unlike, that he had to write alongside of it in Gothic letters, ‘This is a cock; and so it will be with my history, which will require a commentary to make it intelligible.”

Part Two. Chapter LXXI. OF WHAT PASSED BETWEEN DON QUIXOTE AND HIS SQUIRE SANCHO ON THE WAY TO THEIR VILLAGE

Don Quixote obeyed, and stripping himself covered Sancho, who slept until the sun woke him; they then resumed their journey, which for the time being they brought to an end at a village that lay three leagues farther on. They dismounted at a hostelry which Don Quixote recognised as such and did not take to be a castle with moat, turrets, portcullis, and drawbridge; for ever since he had been vanquished he talked more rationally about everything, as will be shown presently. They quartered him in a room on the ground floor, where in place of leather hangings there were pieces of painted serge such as they commonly use in villages. On one of them was painted by some very poor hand the Rape of Helen, when the bold guest carried her off from Menelaus, and on the other was the story of Dido and AEneas, she on a high tower, as though she were making signals with a half sheet to her fugitive guest who was out at sea flying in a frigate or brigantine. He noticed in the two stories that Helen did not go very reluctantly, for she was laughing slyly and roguishly; but the fair Dido was shown dropping tears the size of walnuts from her eyes. Don Quixote as he looked at them observed, “Those two ladies were very unfortunate not to have been born in this age, and I unfortunate above all men not to have been born in theirs. Had I fallen in with those gentlemen, Troy would not have been burned or Carthage destroyed, for it would have been only for me to slay Paris, and all these misfortunes would have been avoided.”

“I’ll lay a bet,” said Sancho, “that before long there won’t be a tavern, roadside inn, hostelry, or barber’s shop where the story of our doings won’t be painted up; but I’d like it painted by the hand of a better painter than painted these.”

“Thou art right, Sancho,” said Don Quixote, “for this painter is like Orbaneja, a painter there was at Ubeda, who when they asked him what he was painting, used to say, ‘Whatever it may turn out; and if he chanced to paint a cock he would write under it, ‘This is a cock,’ for fear they might think it was a fox. The painter or writer, for it’s all the same, who published the history of this new Don Quixote that has come out, must have been one of this sort I think, Sancho, for he painted or wrote ‘whatever it might turn out;’