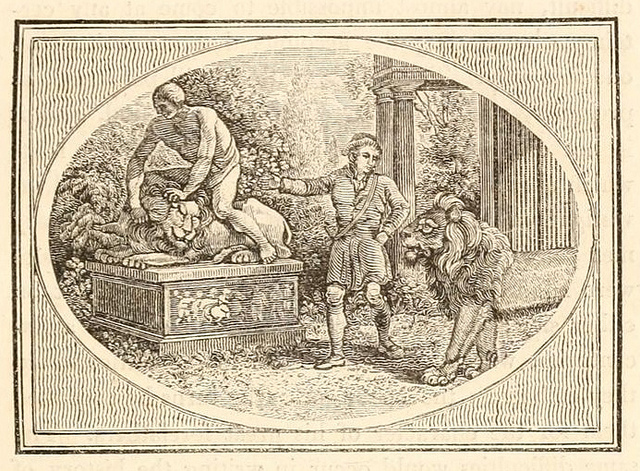 A Fox And A Carv’d Head

As a Fox was rumidging among a great many carv’d Figures, there was one very extraordinary Piece among the rest. He took it up, and when he had consider’d it a-while, Well, (says he) what Pity ‘tis that so exquisite an Out-side of a Head should not have one Grain of Sense in’t.

THE MORAL. ‘Tis not the Barber or the Taylor that makes the Man: and ‘tis no new thing to see a fine wrought Head without so much as one Grain of Salt in’t.

An Old Man And A Lion

A Person of Quality dream’d one Night that he saw a Lion kill his only Son, who was, it seems, a generous Cavalier, and a great Lover of the Chace. This Fancy ran in the Father’s Head to that degree, that he built his Son a House of Pleasure, on purpose to keep him out of harm’s way; and spar’d neither Art nor Cost to make a delicious Retreat. This House, in short, was to be the young Man’s Prison, and the Father made himself his Keeper. There was a world of Paintings every where up and down, and among the rest, there was the Picture of a Lion, which stirred the Blood of the young Man for the Dream sake, and to think that he should now be a Slave for the Fancy of such a Beast. In this Indignation he made a blow at the Picture; but striking his Fist upon the Point of a Nail in the Wall, his Hand cancerated, he fell into a Fever, and soon after died on’t: So that all the Father’s Precaution could not secure the Son from the Fatality of dying by a Lion.

THE MORAL. A body may as well lay too little as too much stress upon a Dream; for some Dreams are monitory, as others are only complexional; but upon the Main, the less we heed them better; for when that Freak has once taken possession of a fantastical Head, the Distemper is incurable.

A Man And A Wooden God

A Man that had a great Veneration for an Image he had in his House, found, that the more he pray’d to’t to prosper him in the World, the more he went down the wind still. This put him into such a Rage, to lie dogging at his Prayers so much and so long, to so little purpose, that at last he dash’d the Head on’t to pieces against the Wall: and out comes a considerable Quantity of Gold. Why this ‘tis, says he, to adore a perverse and insensible Deity, that will do more for Blows than for Worship.

THE MORAL. Most People, Clergy as well as Laity, accommodate their Religion to their Profit, and reckon that to be the best Church that there’s most to be got by.

Mercury And A Statuary

Mercury had a great Mind once to Learn what Credit he had in the World, and he knew no better Way, than to Put on the Shape of a Man, and take Occasion to Discourse the Matter as by the Bye, with a Statuary: So he went to the House of a Great Master, where, among other Curious Figures, he saw several Excellent Pieces of the Gods. The first he Cheapen’d was a Jupiter, which would have come at a very easy Rate. Well (says Mercury) and what’s the Price of that Juno over there? The Carver set it a little Higher. The next Figure was a Mercury, with his Rod and Wings, and all the Ensigns of his Commission. Why this is as it should be, says he to himself: For here am I in the Quality of Jupiter’s Messenger, and the Patron of Artizans, with all my Trade about me: And now will this Fellow ask me Fifteen Times as much for this as the did t’other: And so he put it to him, what he valued that Piece at: Why truly, says the Statuary, you seem to be a Civil Gentleman, give me but my Price for the other Two, and you shall e’en have That into the Bargain.

THE MORAL. This is to put the Vanity of those Men out of Countenance, that by Setting too high a Value upon themselves, appear by so much the more Despicable to Others.

A Pigeon And A Picture

A Pigeon saw the Picture of a Glass with Water in’t, and taking it to be Water indeed, flew rashly and eagerly up to’t for a Soup to quench her Thirst. She broke her Feathers against the Frame of the Picture, and falling to the Ground upon’t, was taken up by the By-Standers.

THE MORAL. Rash Men do many Things in Haste that they Repent of at Leisure.

A Lion and a Man

There was a Controversy started betwixt a Lion and a Man, which was the Braver, and the stronger Creature of the two. Why look ye, says the Man, (after a long Dispute) we’ll appeal to that Statue there, and so he shew’d him the Figure of a Man Cut in Stone, with a Lion under his Feet. Well! says the Lion, if We had been brought up to Painting and Carving, as You are, where you have One Lion under the Feet of a Man, you should have had Twenty Men under the Paw of a Lion.

THE MORAL: ‘Tis against the Rules of common Justice for Men to be Judges in their own Case.

An Image Expos’d to Sale

A Certain Carver, that had a Mercury lay a great while upon his Hands, bethought himself at last of Billing it about in Coffee-Houses, that at such a place there was a God to be Sold, a Merry Penn’orth, and such a Deity as would make any Man Rich, if you Keep him, as well as he will make me Rich if I Buy him. You say very Right says t’other; but ’tis Ready Mony that I want, and the Purchaser will have only an Estate in Reversion.

THE MORAL. Ready Mony goes as far in Religion as in Trade: People are willing to Keep what they Have, and to get what they Can, without Launching out into Lives, and Uncertainties. They are well enough Content to deal in the Sale of Reversions, but they do not much care for Buying them.

An Ass Carrying an Image

As an Ass was Carrying an Image in Procession, the People fell every where down upon their Knees before him. This Silly Animal fancy’d that they Worship’d Him all this while; ’till One Rounded him in the Ear; and told him, Friend, says he, You are the very same Ass with this Burden upon your Back, that you were before you took it up; and ’tis not the Brute they Bowe to, but the Image.

THE MORAL. A Publick Character is never the less to be Reverenc’d, because a Coxcomb perhaps may Carry it; nor that Coxcomb one jot the more, save only for the sake of his Office.

Sir Roger L’Estrange originally published his version of the fables under the title Fables of Aesop and Other Eminent Mythologists in 1692. L’Estrange’s book included fables from the Hecatomythium,1495, of Laurentius Abstemius and other Renaissance fabulists.