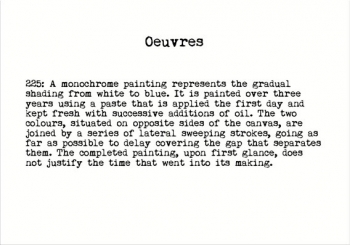 1. A book describes works that the author has conceived but not brought into being.
72. The eraser residues of all the students in a fine arts institute are collected for a year and reconstituted into a cube.
84. Photographs catalogue an inventory of destroyed works. Once its destruction is complete, what’s left of a piece is rubble and ashes. Damages are classified by type: fire, flood, submersion, earthquake, shock, fall, collapse, bombardment, assault, vandalism, poor conservation . . .
89. Soap bubbles are blown into a space where the temperature is 100°C. Keeping the shape that the cold surprised them in, they are exhibited in a refrigerated aquarium.
95. An artist creates ten paintings on his fingernails. Those on his left hand are painted with those on his right hand, and vice versa. The exhibit takes place in the home of the viewer. He is given a ten-sided die and asked to throw it. The artist shows him the fingernail corresponding to the number on the die for as he long as the viewer wants. He keeps his other fingernails hidden. The exhibition ends after ten throws of the die. The viewer has a chance of thirty-six out of a hundred million to see all ten nails in the same session.
110. The atelier of Frenhofer, the painter in Balzac’s The Unknown Masterpiece, as imagined by four readers, is shown as slideshow projections onto the walls of a room. The readers explain their visual interpretation to an artist, who draws the scene, dutifully complying with each reader’s amendments, in the style of an identikit. These drawings form the basis for the construction of four ateliers that are then photographed, the result showing four real versions of this fictive place.
113. The silhouette of a dog is cut out of a pornographic picture.
142. “POISONWOOD FAIRYLAND” is painted in orange block capitals on canvas woven from flax linen taken from a field peppered with poisonous plants.
143. A labyrinth is painted in skimmed milk on a museum façade is destroyed in bad weather.
179. In an enormous hall lies a valley between two mountainous slopes made out of white Styrofoam. At the far end is a crashed Airbus A 320 made out of kebabs. Smaller parts of the wreck, also made out of kebabs are scattered throughout the valley, making visible the trajectory of the accident. The ensemble is looked upon through a panoramic window piercing the wall.
181. The Aleph. A dull glass sphere floats in the middle of a dark room. Random video images taken from cinema and television archives are projected onto its surface from the inside. Landscapes, houses, animals, automobiles, supermarkets, books, news, images, scenes of family, love, war . . .
212. A naked man, seated on a chair. His testicles are two tiny globes: the one the earth, the other the moon.
228. A misty black ring against a white wall—trace of a motorcycle tailpipe.
238. Places are photographed by their reflections in spit bubbles.
247. The paragraphs of a novel are replaced by black rectangles whose surface area corresponds to the number of letters used in the paragraph. Spaces and line breaks are not counted. The top of each rectangle is aligned with where the corresponding paragraph started. The narrative is reduced to a sequence of geometric paintings.
358. The labels on a sound system—CD, Tape, Tuner, Aux—are replaced with new ones: Love, Break-up, Friendship, Depression.
359. A naked man standing upright is adorned with pockets of colour created by using a syringe to inject ink into the layer of silicone he wears on his skin.
372. The daily sounds made by a family in a house are recorded. The family then moves out and the house is emptied. Only the marks made by their furniture on the floors and walls remain. In each room, the sounds made there while the house was occupied are played back.
378. The paintings in a museum of fine arts are temporarily taken down and replaced by monochrome paintings of identical dimensions. The colour of each monochrome is chosen by a computer that analyses all the brushstrokes of the original painting and comes up with its average colour. With rare exceptions, such as paintings of the sky, or night scenes, the dominant colour is brown.
385. A stream disappears into the earth somewhere in a French park where visitors throw flowers into it. Somewhere in a garden in New Zealand, is a spring where the emerging water contains the same flowers.
449. The letterboxes inside an apartment building bear the names of famous dead writers and artists.
499. A human puddle lies on the floor, halfway between a bearskin and a pool of polyurethane. Head, hands, feet, nipples, genitals, buttocks, elbows, knees, and shoulders poke up here and there out of a shapeless mass of pink silicone.
471. Schopenhauer’s The Art of Being Right is read in the tone of a televised soccer commentary.
512. Museum of the Answering Machine. Chosen at random from the phone book, ten thousand messages left on answering machines are collected. Kept on CD-ROM, they can be consulted using a computer, either by typing in a number between one and ten thousand, or through searching for a keyword corresponding to a type of language or to a word used in the message.
520. A novel is shot with a revolver, resulting in a bullet hole piercing its core. The missing words are found in another copy. A short story called “The Hole” is written, using only these words.
530: A Philip K. Dick story is written in reverse. The last sentence is the first, the second to last is the second, and so on, right up to the first sentence, which is the last.
533. After having published a book describing works he has not brought into being, the author gives public readings. The audience is invited to say the number of the work they wish to have read to them, and the author complies by reading the corresponding description. The reading ends when no one asks him to continue.

Édouard Levé’s Oeuvres is modular rather than a narrative literature, describing in the style of a formal catalogue, a potential list of 533 conceptual artworks conceived by the author. Many of the ideas appear odd, banal or ridiculous as isolated conceptual artworks, although they are often closely related to contemporary artists’ statements and projects, and verge on satirizing the content of contemporary art. The first project described in this book, 1. A book describes works that the author has conceived but not brought into being is in fact the book Oeuvres. Some ideas were completed by Levé, in the books Amérique and Pornographie. Oeuvres emerges from the Oulipo group and post-1945 French experimental writing.